This is the first of a series of posts that I’m planning to do using basic examples in EFL, the Enlightenment Foundation Libraries. You may have heard that EFL is reaching its 1.0 release. Instead of starting from the very beginning with the basic functions of these libraries, I decided to go the opposite way, showing the fun stuff that is possible to do. Since I’m also an WebKit developer, let’s put the best of both softwares together and have a basic window rendering a webpage.

Before starting off, just some remarks:

Getting EFL and WebKit

In order to able to compile the example here, you will need to compile two libraries from source: EFL and WebKit. For both libraries, you can either get the last version from svn or use the last snapshots provided.

Grab a snapshot from the download page. How to checkout the latest version from svn is detailed here, as well as some instructions on how to compile

A very detailed explanation on how to get WebKit-EFL up and running is available on trac. Recently, though, WebKit-EFL started to be released too. It’s not detailed in the wiki yet, but you can grab a snapshot instead of checking out from svn.

In the spirit of “hello world” examples, our goal here is to make a window showing a webpage rendered by WebKit. For the sake of simplicity, we will use a default start page and put a WebKit-EFL “widget” to cover the entire window. See below a screenshot: 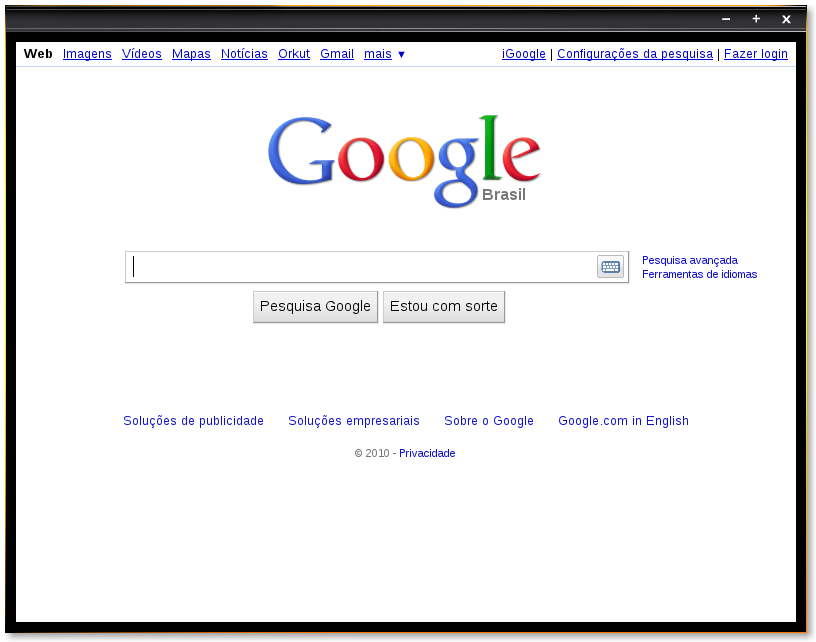 The code for this example is available here. Pay attention to a comment in the beginning of this file that explains how to compile it:

The things worth noting here are the dependencies and a variable. We directly depend on ecore and evas from EFL and on WebKit. We define a variable, EWK_DATADIR, using pkg-config so our browser can use the default theme for web widgets defined in WebKit. Ecore handles events like mouse and keyboard inputs, timers etc whilst evas is the library responsible for drawing. In a later post I’ll detail them a bit more. For now, you can read more about them on their official site.

The main function is really simple. Let’s divide it by pieces:

Before you use a library from EFL, remember to initialize it. All of them use their own namespace, so it’s easy to know which library you have to initialize: for example, if you call a function starting by “ecore_”, you know you first have to call “ecore_init()”. The last initialization function is WebKit’s, which uses the “ewk_” namespace.

Ecore-evas then is used to create a new window with size 800x600. The other options are not relevant for an introduction to the libraries and you can find its complete documentation here.

From the Ecore_Evas object we just created, we grab a pointer to the evas, which is the space in which we can draw, adding Evas_Objects. Basically an Evas_Object is an object that you draw somewhere, i.e. in the evas. We want to add only one object to our window, that is where WebKit you render the webpages. Then, we have to ask WebKit to create this object:

Below I demonstrate a few Evas’ functions that you use to manipulate any Evas_Object. Here we are manipulating the just create WebKit object, moving to the desired position, resizing to 780x580px and then telling Evas to show this object. Finally, we tell Evas to show the window we created too. This way we have a window with an WebKit object inside with a little border.

We need to setup a bit more things before having a working application. The first one is to give focus to the Evas_Object we are interested on in order to receive keyboard events when opened. Then we connect a function that will be called when the window is closed, so we can properly exit our application.

After this, we are ready to show our application, so we start the mainloop. This function will only return when the application is closed:

Before the application exits, we shutdown all the libraries that were initialized, in the opposite order:

This is a basic working browser, with which you can navigate through pages, but you don’t have an entry to set the current URL, nor “go back” and “go forward” buttons etc. All you have to do is start adding more Evas_Objects to your Evas and connect them to the object we just created. For a still basic example, but with more stuff implemented, refer to the EWebLauncher that we ship with the WebKit source code. You can see it in the “WebKitTools/EWebLauncher/” folder or online at webkit’s trac. Eve is another browser with a lot more features that uses Elementary in addition to EFL, WebKit. See a blog post about it with some nice pictures.

Now, let’s do something funny with our browser. With a bit more lines of code you can turn your browser upside down. Not really useful, but it’s funny. All you have to do is to rotate the Evas_Object WebKit is rendering on. This is implemented by the following function:

See this screenshot below and  get the complete source code. 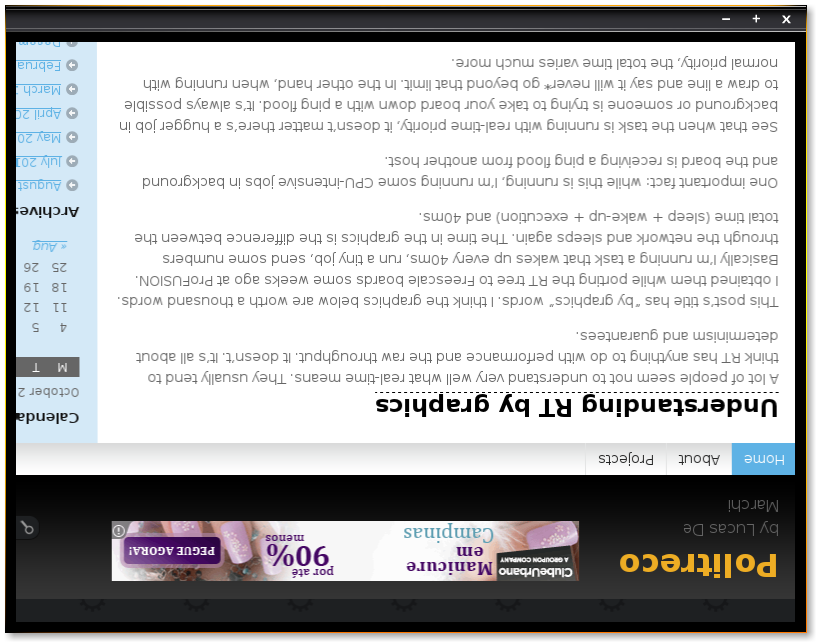